Design and use of Chokes for PS, anode and filament use.
Post Reply
34 posts

Back on the FET amp, I was curious about the frequency response, since the OPT is a trifilar SE to PP, so it steps down 2:1. I do get a rising response starting about 5K, so that makes some sense. I assume that this is a function of the OPT, but could the input transformer contribut too? The DCR of the OPT is about 1 Ohm per wnding. 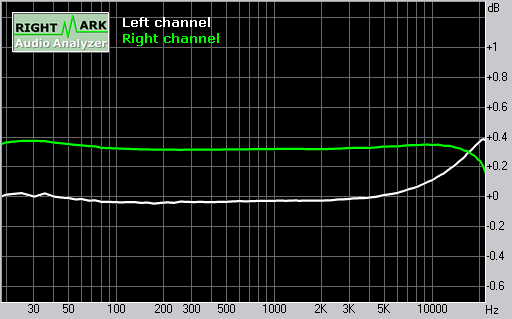 In making the previous measurements, I used a little single channel battery powered OPA2134 preamp, that is adjustable for up to 3x gain. I made the preamp because the sound card puts out a max of 1VRMS and I wanted to be able to push some of my amps harder. What I found interesting is that without this jpreamp/buffer, the soundcard kinda gagged trying to drive the input transformer for the FET amp. Here's the frequency response without the buffer, taken at the same input level. The distortion (higher order) and noise was also higher without the buffer.

My simple minded assumption is that the roll off on the upper end is the card running up against the capacitance in the input transformer. But I'm puzzled by the rising response on the bottom end. More for me to learn about inductors in circuits. 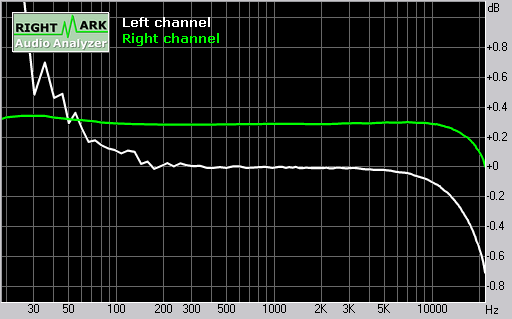 does your sound card have a cap output? the rising bass looks like a simple LC resonance thing and since your input transformer isn't loaded it looks to me like the primary inductance is resonating with the output cap. The buffer may have a completely different output "profile" so it could easily behave differenlty feeding the same inductive load. a simple test would be to put a couple of resistors across the secondary and watch the LF behavior of your soundcard. Knowing the associated part values, spice will probably save you the effort.

the trifilar results could be a number of different things. In general the multifilar approach doesn't work well for phase inversion and your only hope of etting things to behave is to keep the numbers (impedances, turns etc.) low which it seems as if you are doing.

do you need the PP to SE conversion? I'd try a second version with a pair of bifilar wires on either half of a split bobbin (reverse wind one chamber) then for SE output simply use one of the windings to ground.

reading through this thread might give you some ideas. This was for line level and i suspect you want to do output level. Some more details on the core and # of turns might help me make a suggestion for a revision.

Thanks for looking at this one Dave. Yes, as far as I can tell probing these little SMD things, it does have a cap output. My buffer (OPA2134) is DC coupled. You are right that loading the IT secondary modulates the response in the low frequency region. Looks like something a little over 100k gives a flat response. Interestingly I still see the little raggedness of the curve in that region that the buffer does not show.

The trifilar OPT has about 150 or so turns. Could probably get by with fewer if I don't use this for the low end. Regarding your last statement, I think that the results I've shown have some anomalies related to the measuring system. I don't see the rising response at all with a signal generator. It's down 1.2dB at 40k. Also, no rise in the low end. So the OPT seems to be doing its job ok. I do get some distortion below about 40, which I guess is due to inductance limitations. I did gap these, in case I had imbalance from the FETs. Could probable remove the gap or reduce it if I need the bottom end at some point.

What I was looking to do was to replace the interstage transformer, for two reasons: The fun of trying something new, and to make the amp so that I can drive it with a higher impedance source. It's no problem with my current source (DEQX), as it has an output impedance of 75R and plenty of current capability (OPA2134 buffers).

So, I was thinking of something like a little DHT like the 3A5 and maybe a 2:1 - 4:1 step down interstage phase splitter. Quiescent current would be around 3 or 4 mA per section (could parallel too?) or cap couple. Not too much room so couldn't be too big. Pretty high plate resistance, so I don't know if this is too feasible, but it'd be fun to try. I haven't seen anything close to suitable from the usual sources.

That thread is cool. I could go pp to pp, using the tube as a diff amp.