I figured there hasn't been any traffic in this subject or a while so here is a current project.

A friend of the "family" came across a small stash of nice lams. (cobalt, 80% nickel and 49% nickel) and wants to work them into a transformer for a 45. The initial goal was to mix lams in a parafeed transformer but recent experiments by other "family" members pushed him towards trying the offset winding.

Upon discussing his speakers i found he had both 8 and 15 ohm lowther drivers and some 93dB efficient 8 ohm speakers. Since i do not believe in taps, we concluded that a 5K:8R match for the least efficient peakers would be the best starting point. In the case of the 15 ohm lowthers he would simply have a 10K transformer and since the lowthers are more efficient the penalty of the load would be minimal and quite possibly a good choice of compromise.

The downside of all this is that the lams are EI75 which are rather small. Getting 1W out of a 45 won't be an issue if we rely on the cancel winding, but the winding window isn't huge so the DCR's will be a little higher than i would like. The main tradeoff will essentially be choosing between permissible window of operation, inductance and DCR.

The first go around netted me around 35ma with a 30-50ma range of current and had a primary DCR of ~250 ohms and a sec DCR of .7R this was all on an 80% nickel core. the -1dB point on the top end with a 1K8 souce and an 8R load was -1dB at ~65K and the 35hy should be about right for a 45. Granted thse DCR numbers are a bit higher than i would like, but for now we need a starting point and we can get the DCR down by adjusting some compromises in the future.

We haven't addressed the offset winding, but i plan on making it for 1.5A of current so the 45 filament current can be used. the load choke will need ot be in the 100mhy range which isn't an issue @1.5A of current.

I plan on doing a set of bobbins and then providing a full set of cores in all three materials (i think i even have some M-6 in that size) then a number of interesting things can be tried and reported back on.

Hopefully if we document the design details and perceived sonics of the various configurations we can all learn something or at least collect some interesting data points.

Lets start with the concept of mixing lams. I have no doubt that the proper mixture of core materials in discrete lams can yield very linear behavior under simple conditions. Both Steve bench and the person who supplied the small stash of lams have noted this. When signals become more complex, the situation becomes less clear to me.

Lets start with a mixture of 80% nickel and cobalt (hiperco50) lams. Steve noted that this mixture gave him very linear results in measured inductance over varying DC current. This suggests that the net perm remains very constant with excitation and it just so happens that the most linear of core materials is perminvar (PERMeability IN VARiable) which happens to be a cobalt nickel mixture with a special anneal.

Next up came the concept of some nickel in the middle of some steel and that is a concept i have wrestled with for some time. The claim is the nickel gives low level detail and the steel gives high level power, but I just don't see how the lams could discriminate like that. Sure, if the only thing present is low level info then the nickel would dominate, but as power comes along, then the nickel would also accept the power and saturate leaving the low level remains for the steel still left in the picture.

when you consider that the original mixed core samples were nickel steel and used for PP applications, unless there were provisions for a perfect DC null in the circuit, any DC offset would follow the path of least reluctance. (through the path with the highest perm.) Even in the case of a perfect null, I still say the larger flux levels would dominate the higher perm material which on the surface flies in the face of the "simple" argument that the nickel would handle the low signals and the cobalt the power. Sure it makes for good marketing speak, but i',m more interested in a discussion in what is really happening and we have a situation where some ears on data can be added into the mix to confirm or deny in a statistically insignificant sample of one.

I went into my stash and luckily i had enough cobalt to make 3 complete sets of cores (Cobalt, 49%, 80%) and ran the curves for the bobbin for each with a butt gap and a .0015 physical gap (gold shim for those in the know).

I started with the cobalt and immediately noticed something odd WRT my experiences with 80% nickel. With 80% nickel, as i increase current the onset of "saturation" is quickly noted by a distinct drop in Q. In order to perfectly balance my bridge, i need to adjust both the L and the Q values to get a null and over time i have noticed that with 80% nickel the Q remains stable where the inductance is linear and as L drops with saturation so does Q.

my experience with measuring 49% nickel has shown a similar pattern but the transition into saturation and the required adjustment of the Q was much more gradual.

Now back to the cobalt (hiperco 50) I thought my bridge was acting up since the Q values were very small at no DC current and then as current was increased, the Q went up too. I have measured cobalt before, but this was prior to my observations of the behavior of the Q and i figured bit of documentation was in order.

I have a number of thoughts on the matter and a direction i'd like to go in for looking a bit deeper, but for now i'll just put up the graph of the data and point out that the Q of the cobalt behaves very differently than that of the nickel. 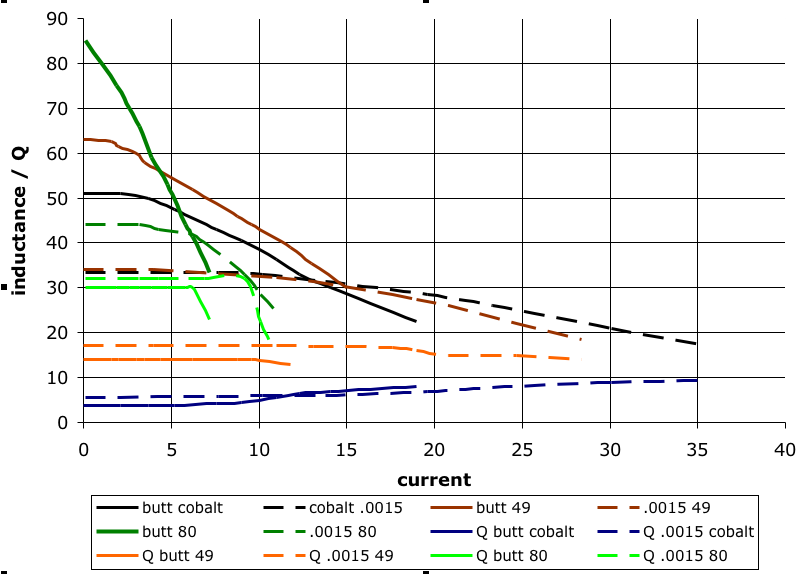 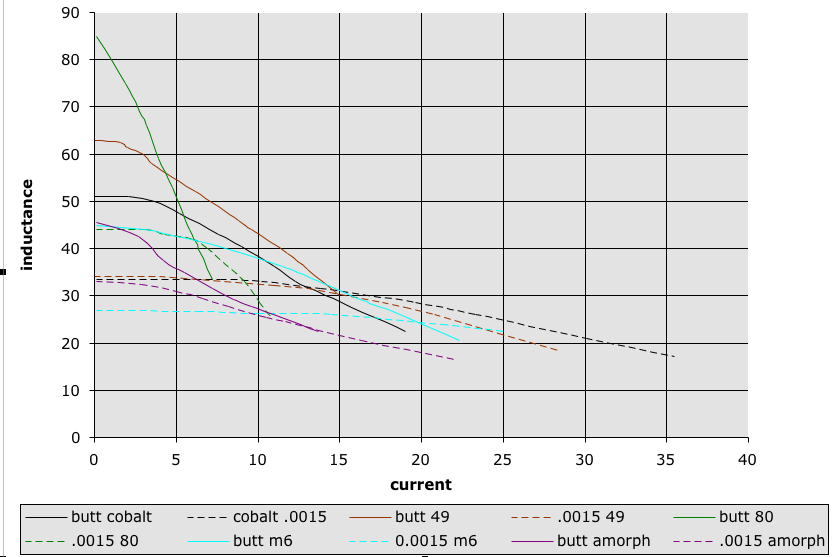 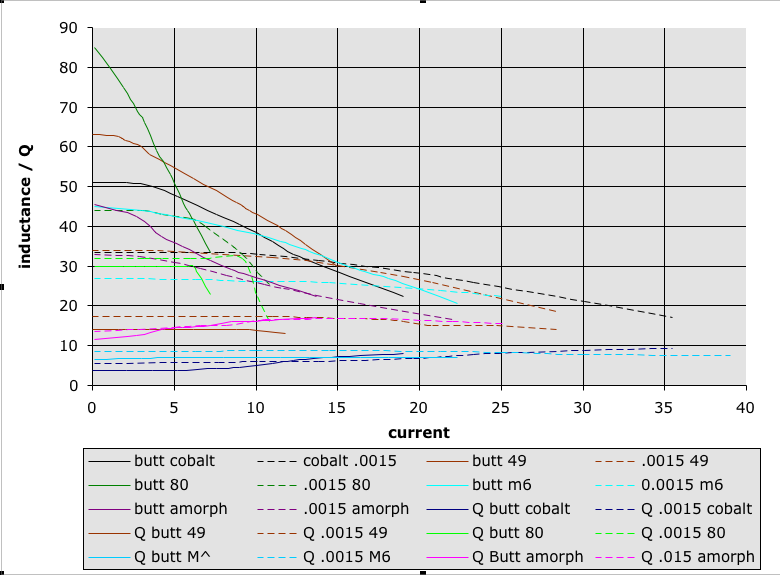 Hi
I'm new on this forum.
I came for the interesting posts of current cancellation winding.
I can read the posts on this subject that I hardly understand since I don't have the beginning of the story, the schematics and the theory.
Where can I find these ?
Thank in advance
Top

The basic concept is to put a current through an additional winding on a transformer and feed it with a high impedance current in the opposite direction as the anode current to get a net 0mA dc current through the core. For DHT's the simple way to obtain this current is to use a current source like a coleman reg for the filaments and put the "offset winding" in series with that. I find that the ultimate goal is not to strive for a 100% null but to use the offset as a helper. If you use a core that is gapped for 20ma and offset 80ma you now have a 60-100ma operating window. This opens up the possibility for more inductance / 80% nickel cores etc.

here is a picture of a circuit Jeremy drew up for a 2A3. using offset windings in both the OT and the plate choke.

Get Your Fix
www.hifiheroin.com
Top
Post Reply
6 posts • Page 1 of 1